Skip to content
Christmas Fun Facts: Did you know…. You can thank Prince Albert for your Christmas tree!

Did you know…. Mistletoe is an aphrodisiac!

While Christmas celebrates the birth of Jesus Christ, there is no mention of December 25 in the Bible. Most historians posit that Jesus was born in the spring. And his birthday itself didn’t become the official holiday until the third century. Some historian believe the date was actually chosen because it coincided with the pagan festival of Saturnalia, which honored the agricultural god Saturn with celebrating and gift-giving.

The tradition of Christmas trees goes all the way back to ancient Egyptians and Romans, who marked the winter solstice with evergreens as a reminder that spring would return. So if you decorate with a green tree, wreaths or evergreen garland, you’re throwing it back – way back.

You might want to brew a cup o’ tea when trimming your tree this year to pay homage to its origins. When Prince Albert of Germany introduced a tree to his new wife, Queen Victoria of England, it really took off across the pond. A drawing of the couple in front of a Christmas tree appeared in Illustrated London News in 1848 and as we say, the idea went viral.

You probably already knew that the idea of Santa Claus came from St. Nicholas, but the real saint wasn’t a bearded man who wore a red suit. That all came much later. According to legend, the fourth-century Christian bishop gave away his abundant inheritance to help the needy and rescued women from servitude. His name was Sinter Klaas in Dutch, which later morphed into Santa Claus.

Before Coca-Cola got in on it, Santa used to look a lot less jolly — even spooky. It wasn’t until 1931, when the beverage company hired an illustrator named Haddon Sundblom for magazine ads that we got the jolly old elf. Now, kids won’t get nightmares when they dream of Christmas eve.

According to legend, we hang stockings by the chimney with care thanks to a poor man who didn’t have enough money for his three daughters’ dowries. Generous old St. Nick (remember, that’s his trademark!) dropped a bag of gold down their chimney one night, where the girls had hung their stockings to dry. That’s where the gold ended up, and how the tradition began.

The Christmas wreath originated as a symbol of Christ. The holly represents the crown of thorns Jesus wore at his crucifixion, and the red berries symbolize the blood he shed. So when you see a wreath this season, you’ll remember the reason for the season.

The Jamestown settlers created the first American batch of eggnog, although it may not have tasted quite the way we know and love today. The word nog comes from the word grog; or any drink made with rum. So technically, an early nog didn’t require the rich, milky base we now ladle out of grandma’s cut-crystal punch bowl.

Think “Xmas” is a newly nefarious attempt to take Christ out of Christmas? Think again. According to From Adam’s Apple to Xmas: An Essential Vocabulary Guide for the Politically Correct, “Christianity” was spelled “Xianity” as far back as 1100. X, or Chi, in Greek is the first letter of “Christ” and served as a symbolic stand-in. In 1551, the holiday was called “Xtemmas” but eventually shortened to “Xmas.” In reality, Xmas is just as Christian as the longer version.

The holiday flora is an ancient symbol of fertility and virility — and the Druids considered it an aphrodisiac. So, keep that in mind next time someone jokes about meeting you under the mistletoe. You might want to know what you’re getting yourself into! 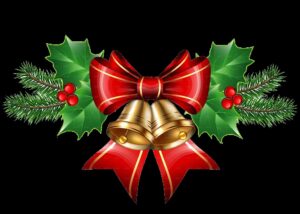